2 weeks ago I accomplished one of the greatest challenges I have ever given myself. I decided to follow a 10-day silent meditation course. Although it sounds like an opportunity for relaxation and an escape from my everyday ‘trials and tribulations’, it was quite the opposite.

Back in January I was speaking to my cousin about meditation and how although it had given me much benefit, I never fully managed to integrate it into my daily schedule. Little did I know, I was actually using a relax-meditation technique called Pranayama, as taught by Deepak Chopra. So passionate about the way meditation became engaging by using mantras, background music and controlled breathing, I started sharing this valuable knowledge with those around me. Then, without the slightest intention to instill a change in me, my cousin introduced me to a form of meditation that turned my view of meditation on its head. 6 months later I would learn that the purest and most effective form of meditation requires you to take the first steps on the path to enlightenment. Siddarth Gottama, the Buddha most people think is the original and only Buddha, developed a technique for such meditation and it has been preserved in it purity in Myanmar ever since. Something I never knew was that there have been many Buddhas in history, and that the title of ‘Buddha’ is given to anyone who has been enlightened and then devotes their life to teaching others to take a step on the same path. This way the technique was passed down from Buddha to Buddha (no pun intended), and I had the pleasure of learning it from S.N. Goenka and his assistant teachers in Dilsen-Stokkum, Belgium. In S.N. Goenka’s words:

“Vipassana, which means to see things as they really are, is one of India’s most ancient techniques of meditation. It was taught in India more than 2500 years ago as a universal remedy for universal ills, i.e., an Art of Living.” (Dhamma.org).

In order to learn this technique, students must abstain from killing all living things, intoxicants, sexual activity, communication and must follow a strict schedule that includes waking up at 4:00am each morning, fixed eating times and 10+ hours of meditation every day during the course. After day 2 it already started to feel like I was torturing myself by being there, but seeing the determination of all the other students around me convinced me to stay until the end of the course. After day 3 or 4 I really started understanding the technique and experiencing the calm and concentrated state of mind that the daily lectures kept talking about, and this newfound skill motivated me to continue with devotion. Although I never stopped wanting to quit and go home, to stop the agony of having to sit still and meditate for even one more minute, I started to realize that when I was meditating I actually felt very good, and that the aversion toward it was fabricated in my mind and only existed just before entering another meditation session.

1. Focus on your regular breathing as it is (don’t alter it like in Pranayama meditation)
2. Feel the touch of your breath in and around the nose (this is called Anapana meditation)
3. Feel the sensations on the top of your head and move down to your toes, then back to top of your head, scanning the entire surface of the body for either tingling, pressure, pain, cold, warmth or any other sensation, however subtle (this is called Vipassana meditation)
4. Feel the sensations on the inside of the body and conduct a similar scan, until you can feel sensations everywhere
5. End the meditation with 5 minutes of Metta Meditation: sharing your calmness, positive spirit and enlightenment with all living beings (the assistant teacher was projecting us with Metta during our meditation as well)

The Science Behind the Technique

As I’m not one to immediately believe whatever I see or hear, I could really appreciate that this technique was oriented around students experiencing sensations and calmness of mind themselves. During the long hours of meditation and the explanations during the lectures I began formulating my own justification for why this technique of separating mind from matter and experiencing egolessness would enable us to gain more control over our thoughts and reactions. See the below diagram for a visual representation.

At the core, our bodies are made up of cells, which in turn are made up of molecules. When we experience something that happens the physical world, we are essentially sensing our environment through one of our 6 senses, recognizing it, and then reacting to it. This reaction manifests itself in a changed respiration rate as well as a sensation in or on the body. This is the way that our brain stores the feelings or emotions we experience, as well as triggers the memories linked to an occurrence in our environment.

Looking deeper, science tells us that the physical sensations we feel are generated by our nerve endings, which are the links both transmitting and receiving information from our cells. So how is it possible that we don’t always feel the same sensation from the same cell? On a molecular level, our cells are constantly changing, particles being created and dissolved. As the particles are constantly changing, so are the cells and thus our body is never exactly the same from one moment in time to the next. 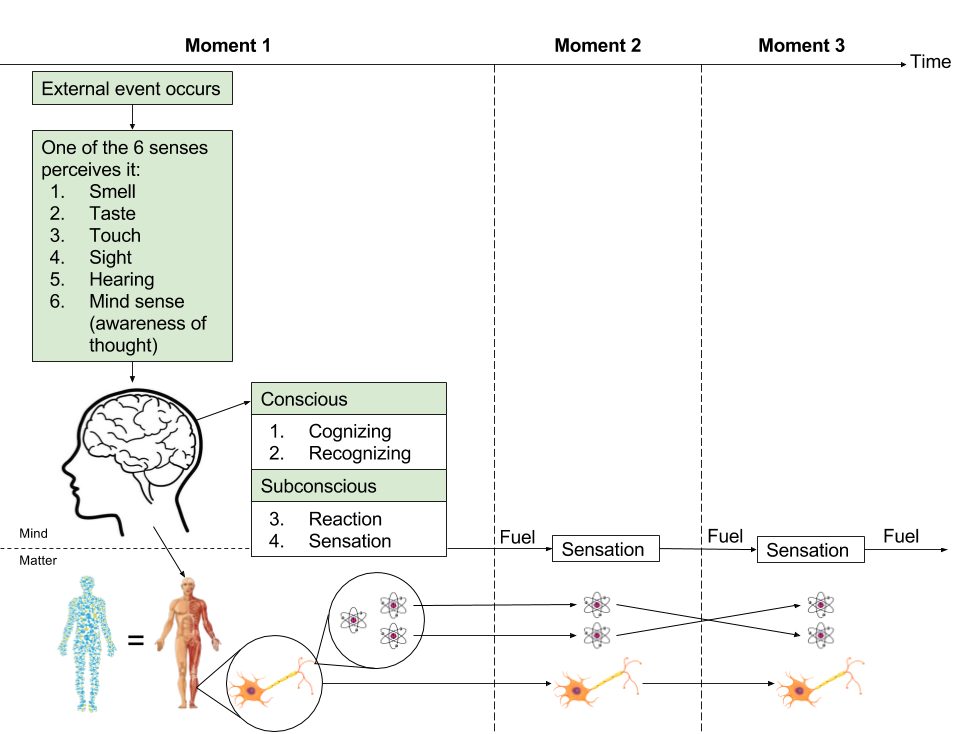 Every external experience has an internal reaction, which manifests itself as a physical change (sensation). This sensation is then sensed as an experience, which triggers another reaction and so on and so forth. This means that the sensations we feel are fueling the continuous process of thought and sensations and we lose control over our thoughts and emotions. I’m sure you have found yourself completely lost in thought, or daydreaming. People who often ‘overthink’, like myself, for example about occurrences in relationships or things we said generate either craving or aversion towards the external experience they are thinking about. This craving or aversion eats away at our mind and becomes a source of misery.

If we could stop the process of reacting to these sensations, we would be able to stop the continuous train of thought and regain control over our mind. Vipassana meditation teaches you to focus on the sensations in the body, but to merely observe them as they are, rather than react to them. By seeing the sensations as impermanent and seeing ourselves as a bundle of changing molecules (equanimity), we are able to objectively observe sensations and pause the train of thought. For me, this experience was liberating and changed my perception of the way our minds work. However, this is not something that can be understood by reading about it, it is something that you must experience first hand to understand.

In many ways, Vipassana meditation has similarities to modern ‘mindfulness’ techniques. Reminding yourself about the concepts of equanimity and impermanence helps you to overcome stress of feeling like a slave of your mind, of the society we live in and of time. By looking objectively at sensations inside rather than occurrences outside shows us what is truly important. It helps us to realize that the way we feel is never the fault of an external event, but it is the fault of the way we react to that event.

Seeing the body as an ever-changing (impermanent) structure of molecules, one allows the mind to view matter from an external perspective. Realizing that all thoughts are the result of sensations evoking past feelings by generating craving or aversion towards them, one can stop fueling thoughts by disassociating mind from matter. The mind can be purified as it is merely aware sensations and not reacting by suppressing or expressing them. This stops the perpetuation of misery, and allows you to merely observe pleasant and unpleasant events rather than to react to them. Of course you shouldn’t become lethargic and never react to anything, but by first observing, you can make a clear decision about how you should react.

Besides stopping the generation of new sensations by being aware of your breath, when intensively meditating during a Vipassana course the body also releases uncomfortable sensations that have manifested themselves in the body for a long time.

Key Experiences During the Course

Going Forward: What Comes After the Course?

My Reflection 2 Weeks Later
Participating in the course has helped me in every aspect of life. I’m much more effective with finishing tasks at work, I don’t take external events too seriously and dare to take more risk. Especially in social situations, knowing that negative repercussions can only influence the image I have of myself, I can take risks by disassociating my self image from my happiness and peace of mind. I can proudly say that I look forward even more to the remaining days, weeks, months and years of my life.

I was born in the Netherlands but raised in Tanzania. My primary interest is in modern business, with a tendency to prefer working on technical concepts. I launched a Kickstarter campaign for my product called SODAQ Moja in 2013, and now started my own enterprise which can be found on www.kukua.cc